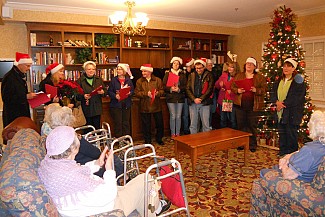 On the second day of Christmas, the Synaxis of the Theotokos,  choir members of St. Nicholas Church in Bethlehem brought the joy of the Nativity to parishioners and many others in nursing facilities and at home.  Seventeen choristers  came bearing gifts of poinsettias and gift bags of goodies, but the greater gift was their cheerful singing of hymns, carols, and other selections of the season.  The happy sounds brought many elderly out of their rooms to listen and join in the singing.  In addition,  during a lunch stop,  diners were entertained with commonly heard carols.  Everyone who  heard the music,   parishioners, facility personnel, diners, and the singers themselves,  were all tremendously uplifted by the sounds of the Nativity.