On Thursday – Friday, January 26th and 27th, the Diocese of Eastern Pennsylvania gathered for the 53rd Assembly in Harrisburg, PA.
The Assembly began at 4:00 pm on Thursday evening, with the Archbishop’s address to the Diocese and other administrative business with dinner following at 5:00 pm. Great Vespers was then served by host priest, Archpriest Stephen Vernak, and Deacon Seraphim Reynolds (Administrator of the Lykens Parish). Following Vespers, an inspiring and challenging presentation was given by Bill Marianes. It was the consensus of the group to have Bill back to give a longer retreat where the important and necessary information could be properly digested and implemented. More information on Bill and his presentations can be found on his website: www.StewardshipCalling.com. Following the presentation, a wine and cheese social was held, which was a new addition to the events of the Assembly, but one well received as it gave a time for food and fellowship, and for the clergy and delegates to get to know one another better.
The Divine Liturgy was served on Friday morning on the feast of the translation of the relics of St. John Chrysostom. His Eminence was assisted by Archpriest Martin Browne, Chancellor, and Archpriest Nicholas Solak, Dean of the Wilkes-Barre Deanery, and Archpriest Victor Gorodenchuk, Dean of the Philadelphia Deanery, Archpriest Stephen Vernak, host pastor, and Protodeacons Gregory Moser and Peter Skoog. The Sermon was offered by Archpriest Timothy Hojnicki, Dean of the Frackville Deanery, reflecting on the connection with that day’s feast, and the call to action from the presentation the night before. The responses to the Liturgy were beautifully sung by the Choir of Christ the Saviour Church under the direction of Rdr. James Latimer.
At the end of the Liturgy, Diocesan Gramotas were presented to Archpriest Michael and Mat. Valeria Hatrak, and Archpriest Michael and Mat. Sonya Evans for their many years of service to the Diocese of Eastern Pennsylvania. May God grant them many years!
Following the Liturgy and brunch, the rest of the business proceedings were held in the Christ the Saviour Hall. Of note was the discussion about the Diocesan property and the possibility of the Diocesan center being sold and something else being purchased in another area.
Everyone agreed the Assembly was peaceful, productive, and prayerful. His Eminence, and the entire Diocese offer thanks to Fr. Stephen and the faithful of Christ the Saviour parish for their efforts in hosting this annual event.
The next Assembly is scheduled for January 25-26, 2018 at St. Michael’s Church, Wilmington, DE. 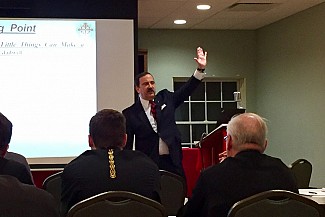 Attendees began arriving and registering for the 53rd Diocesan Assembly. Following the Formal opening, the Assembly got right into the agenda, breaking for dinner before Great Vespers and a presentation by Bill Marianes entitled "Igniting the Flame - Living in H.D." The Assembly continues on Friday, concluding in the afternoon. 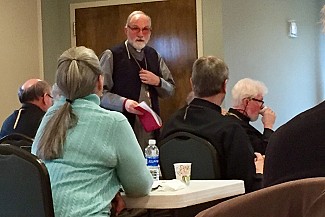 The 53rd Diocesan Assembly continued in Harrisburg, PA on January 27, 2017. The day began with Divine Liturgy at 8:30AM, followed by bruch. Reports were given beginning at 10:30 AM. 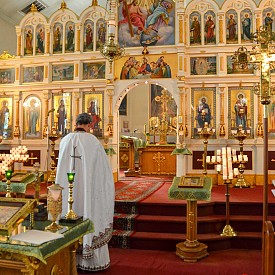 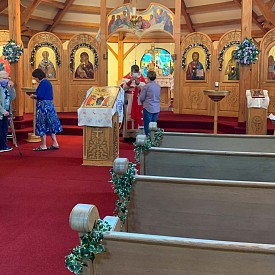