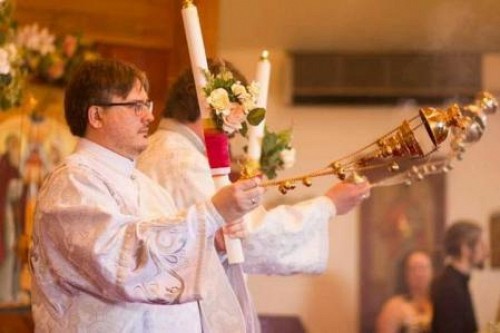 Protodeacon Gregory Hatrak fell asleep in the Lord the evening of July 1, 2017, at the age of 46. Protodeacon Gregory most recently served as Director of Marketing and Operations for St. Vladimir’s Seminary Press (SVS Press) and Bookstore.

"We are most grieved by Pdn. Gregory’s sudden falling asleep in the Lord,” said Archpriest Chad Hatfield, president of St. Vladimir’s. “This is both a profound personal and professional loss to our school, and we are keeping our beloved Protodeacon, his wife, Matushka Robyn, and his parents and family members in our prayers.”

Born December 22, 1970, in Minersville, PA, Pdn. Gregory was the son of Archpriest Michael and Matushka Valeria Hatrak. His love for assisting in the liturgical services began at age three, when Pdn. Gregory started serving in the altar with his father in the church of Ss. Peter and Paul, a parish of the Orthodox Church in America (OCA), at which Fr. Michael served as rector.

Throughout his youth, Pdn. Gregory was a member of the Boy Scouts. During his years at Minersville High School, he played the saxophone in the marching band, and, beginning at age 16, he also worked as a volunteer firefighter for the Minersville Rescue Hook and Ladder Company. Upon high school graduation in 1988, he attended St. Tikhon’s Orthodox Theological Seminary in South Canaan, PA, and eventually obtained a Bachelor of Theology degree through a joint program between the seminary and Marywood University in Scranton, PA.

After his graduation from the seminary, Pdn. Gregory worked on the grounds of St. Tikhon’s Monastery and eventually became the Manager of St. Tikhon’s Seminary-Monastery Bookstore. During his nearly 15 years of employment on the seminary-monastery grounds, Dn. Gregory also resumed his work as a dedicated volunteer firefighter, this time for the Lake Ariel Fire Company.

Pdn. Gregory married his wife Robyn (née Alexander) on October 19, 2008. He was ordained to the Holy Diaconate by then Bishop Tikhon (now His Beatitude Metropolitan Tikhon, primate of the OCA) on Sunday, September 26, 2010, at his home parish of Ss. Peter and Paul Church in Minersville, during the parish’s 100th anniversary celebration. On May 20, 2017, he was elevated to the rank of Protodeacon, in recognition of his many years of assisting both Metropolitan Herman and Metropolitan Tikhon; and for his dedication in training servers and deacons, as well as for his expert service in the altar area, where he often guided higher ranking clergy through the necessary liturgical motions.

Pdn. Gregory started working at St. Vladimir's Seminary Bookstore as Manager in 2010, and because of his ability and expertise, he quickly rose to the position of Managing Director, both of the Bookstore and of SVS Press. Under his tenure, SVS Press and Bookstore underwent tremendous growth, and in 2016, for the first time, sales reached the $1M mark. The Bookstore and Press also expanded their reputation and sales in national and global markets, including Great Britain, as Pdn. Gregory kept up a rigorous travel schedule to ensure visibility of SVS Press products.

Our hearts go out to all of them, as we mourn our dear colleague in Christ. Memory Eternal!

Visitation will be held at Three Hierarchs Chapel, Saint Vladimir’s Seminary, at 9:00 a.m. on Wednesday, July 5.  A Panikhida followed by a repast will be celebrated at 10:00 a.m., after which Protodeacon Gregory will be taken to Saint Tikhon of Zadonsk Monastery Church, where regular daily services will begin at 4:30 p.m.  He will lie in state through the Funeral Service, which will be celebrated at 7:30 p.m.  On Thursday, July 6, the Hierarchical Divine Liturgy will be celebrated at 9:30 a.m.  Metropolitan Tikhon will preside.  Interment will follow in Saint Tikhon’s Monastery Cemetery, followed by a mercy meal at Saint Michael’s Center, 403 Delaware Street, Jermyn, PA at approximately 12:30 p.m.

For those wishing to make a contribution in Protodeacon Gregory’s memory, a Memorial Fund has been established for the benefit of Matushka Robyn. 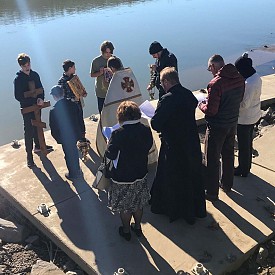 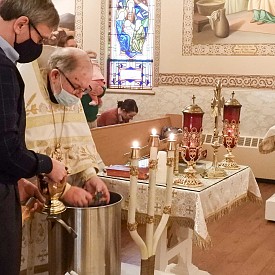