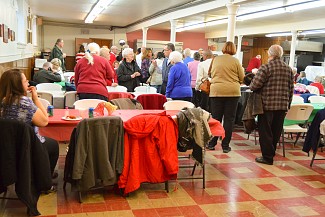 On Sunday, December 17, 2017, St. John the Baptist Orthodox Church in Edwardsville, PA welcomed guests from parishes in the local community for their third annual “Make a Joyful Noise” Community Nativity Concert. Choirs from the parishes present sang traditional Christian carols, as well as ethnic selections from their respective backgrounds.
The choir of St. John the Baptist led off, signing selections particular to liturgical services celebrated only during the Nativity. St. Vladimir’s Polish National Church was joined by choir members from Resurrection Polish National to perform Nativity standards in English and Polish. The event concluded with Immanuel Baptist church, joined by members of all choirs as well as the congregation singing traditional Christmas standards.
After three years of the event, all were excitedly looking forward to sharing fellowship with one another. Many people were heard to remake “they should have sang more songs!” The concert lasted about an hour. Following a prayer, members of St. John the Baptist and other Orthodox Christians in attendance sang “God Grant You Many Years” in English and Slovanic for everyone gathered. The crowd retired to Repella Hall to share a meal and Christian Fellowship. This event has turned into a highlight event for not only St. John’s, but the greater community as well.
A video of the entire concert is available at the St. John the Baptist website.