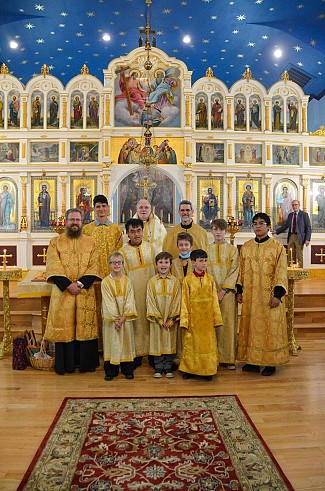 On Sunday, October 11, the community of St. John the Baptist Orthodox Church in Edwardsville, PA welcomed His Eminence, Archbishop MARK. His visit was timed intentionally so that he could see the fruits born from Phase 1 of the "Heavenly Vision" project.

During Divine Liturgy His Eminence delivered a homily calling all of us to understand that death is not something Christians should be fearful of; Christ has overcome sin and death for us. Vladyka pointed to 2,000 years of saints that have gone before us through death. Even though they have died, they now truly live (eternal life). He also emphasized the importance of regular participation in the sacraments of confession and communion. Christ’s body and blood is nourishment that we need on a regular basis, even more than once a week, when possible.

At the conclusion of Divine Liturgy, a number of recognitions were made. First, Fr. Silouan’s youngest son, Isaiah Burns, was recognized for the occasion of his 8th Birthday with the singing of Many Years and a blessing of Holy Water. Second, several notable “milestone” wedding anniversaries were recognized - Joyce and John Walsh celebrating their 50th, and Michael and Sandra Lukatchik celebrating their 30th. Third, the annual Archimandrite Anthony Repella awards were presented to those who have exhibited exemplary service to the Church. This year’s recipients were Anna Antall, Karen Rushton and Aric Gingo. The anniversaries and reward recipients were all presented with a certificate signed by His Eminence, had Many Years sung for them, and they were blessed with Holy Water. Once again, Many Years to you all!

October is Clergy appreciation month, and even though Father Silouan and family have only been with us since May, we all wished to recognize and thank him. The Council presented him with a gift, as well as most of the parishioners. Father Michael Evans who is attached to the parish in retirement was also recognized.

His Eminence then blessed all of the Phase 1 renovations which included the new paint job (walls, ceiling, and stars), new hardwood flooring, new lighting system, pews reconfigured, and much more. He also blessed new icons of Jesus and the Theotokos to replace the old ones outside the Royal Doors, graciously donated by the Sunday School. The blessing of the icons also served as a launch for Phase 2, which will be a project taken at a much slower pace. Phase 2 involves the updating of the iconography on the iconostasis and throughout the Church.

Following all of this activity, everyone gathered in Repella Hall for a banquet in honor of His Eminence. There were many different foods representing the ethnicities of the parish, including old-fashioned American food, Tex-Mex, Eritrean, Middle-Eastern, and Slavic. Fellowship went on until close to 2pm! No one wanted to leave; it was a joyous and beautiful day for all. 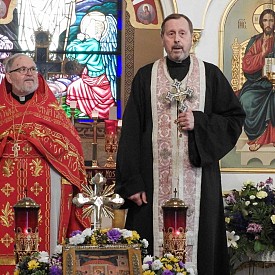 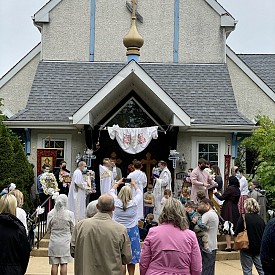