Father Eugene was educated at Nanticoke High School where his late father was the pastor of St. John the Baptist Orthodox Church for many years. After graduation Father Eugene entered St. Tikhon’s Preparatory and Theological Seminary graduating in the class of 1950,  after which he became Choir Director at Holy Trinity Orthodox Church in Yonkers, N.Y until his ordination.

On February 4, 1951 Father Eugene married Joanna Sweda of Olyphant, Pa. who predeceased him on January 14, 2012 after over 60 years of marriage.

On March 4, 1951 he was ordained to the Holy Diaconate then to the Holy Priesthood on April 6, 1951, after which he received his first assignment as the Assistant Pastor of the Holy Resurrection Orthodox Cathedral in Wilkes-Barre, Pa. under the rector, the late Father Krashkevich whom he admired greatly.

During his time in Wilkes-Barre, Pa. the young and energetic Father Eugene worked diligently in advancing the Orthodox faith, conducting for the first time, Orthodox services on television in the commonwealth of Pennsylvania.  He was also the first Orthodox priest appointed as  Chaplain of the VA Hospital in Plains, Pa. He also lectured on numerous occasions at St. Tikhon’s Seminary invited by the late Metropolitan Leonty (Turkevich) Of thrice blessed memory. He remained at Holy Resurrection until October 1958, when he was appointed rector of Sts. Peter and Paul Russian Orthodox Church in Springfield, Massachusetts where he remained until his retirement on January 1, 2003 being assigned by Metropolitan Herman to the Monastery Church of St. Tikhon of Zadonsk.

During his tenure at Sts. Peter and Paul, Father Eugene served as Spiritual Director of the Diocesan Religious Education Department under the direction of the national director, Father John Kivko.  In 1965, Father Eugene was elevated to Archpriest and subsequently elected Dean of the Connecticut Deanery as well as representative for New England on the Metropolitan Council of the Orthodox Church in America.  He was the Vice President of the New England Diocesan Council under the late Archbishop Dimitri (Royster) later being appointed the New England Diocesan Chancellor in 1974. Throughout this period Father Eugene worked steadfastly in propagating the Orthodox faith among the younger generation of Orthodox Christians.

In addition to his Church duties Father Eugene was active on the Springfield, Mass. Parents Advisory Council of the Springfield School Board for many  years and the Springfield City Council committee on school vandalism.  He also was well known for his religious radio programs on WHYN  on Sunday mornings for well over eight years. Another achievement was his appointment as the first Orthodox Chaplain of the University of Mass. at Amherst.

Since his retirement Father Eugene has faithfully served first at All Saints Orthodox Church, Olyphant, Pa.  and until his falling asleep at the Church of his birth and baptism, St. Nicholas Orthodox Church, Olyphant, Pa. with the pastor, Father Vladimir Fetcho, who the entire family owes a deep debt of gratitude for his love and friendship with our father and grandfather for these many years.

Lastly after 69 years of Holy Priesthood, in May 2019, Father Eugene received the Mitre from His Beatitude Metropolitan Tikhon and the Bishops of the Holy Synod of the Orthodox Church in America for his many years of loving service before the Holy Altar of Our Lord and Saviour Jesus Christ.

Well done, good and faithful servant.  You have been faithful over a little; I will set you over much. Enter into the joy of your master!  Matthew 25:21

Funeral Arrangements are as follows: 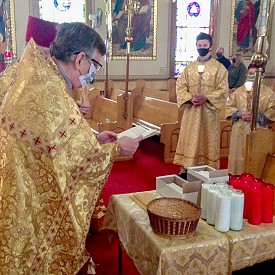 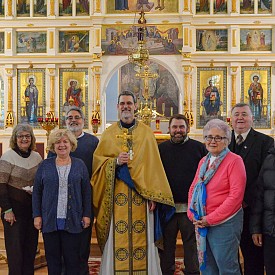