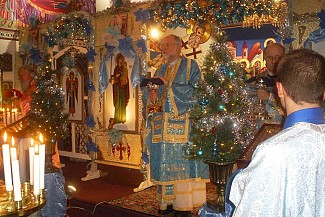 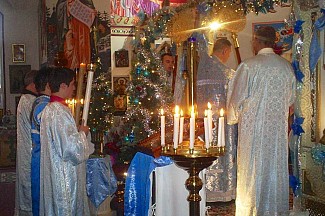 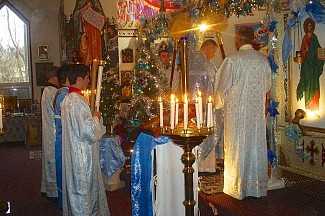 St. Herman of Alaska, Gradyville celebrated its 40th anniversary on December 8, 2013. The weekend celebration included Vespers and a reception on Saturday evening , Divine Liturgy on Sunday and a banquet at LaLaconda Restaurant on Sunday afternoon. Approximately 100 people were in attendance and not even the unexpected snow storm could hinder the joy of this special occasion.

The Divine Liturgy was concelebrated by Very Rev. John J. Perich, Bishop Mark,  Archimandite Afanasi and  Rev. James Dougherty. Also in attendance was Fr. Richard Cannuli from Villanova University. The parishoners of St. Herman's were grateful for the presence of the miraculous icon of St. Anna and the visit by Bishop Mark and other clergy. St.Herman's Sunday School in preparation for the 40th anniversary spent several weeks learning about St. Herman's life.

St Herman Church was founded in 1973 by a group of dedicated Orthodox Christians whose dream was to build an Orthodox house of worship in the western suburbs of Philadelphia, in Delaware County, where Orthodox of various traditions and backgrounds could worship together. The first Divine Liturgy was celebrated Sunday, September 30, 1973 by the Rev Nestor Geeza, in the Episcopal Church of the Atonement in Morton, PA, which served as a "temporary" home for the parish for the next few years.

In 1977, the parish purchased its first property in Wallingford, PA. This edifice served the parish community well until 1993, when the property was sold and a new and larger parcel of land was acquired, located in Gradyville, Edgemont Township, on the border between Chester and Delaware counties, probably the fastest growing areas in the Commonwealth of Pennsylvania.

On November 1, 1998, the parish celebrated its twenty-fifth anniversary  His Eminence, Archbishop Herman was the main celebrant at the Hierarchical Divine Liturgy, at which the new iconostas was blessed. After the Liturgy, the newly constructed Church Memorial Hall was solemnly dedicated. A banquet was held at Desmond Great Valley Hotel in Malvern, PA.

The St. Herman's family remembers the founders and departed parishoners  who were such an integral part of our church history. May we all strive to emanate St. Herman's words  "from this day, from this hour, from this minute, let us love God above all!” 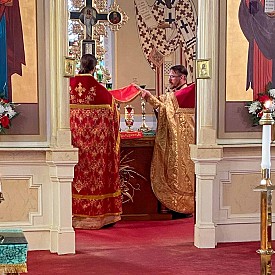 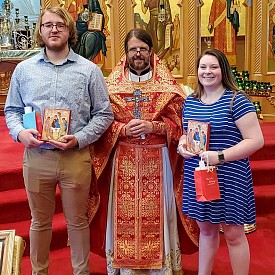