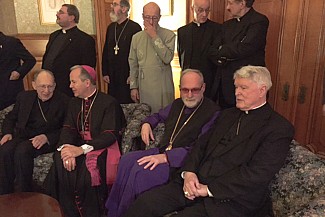 On Wednesday evening, January 18th, the Annual Orthodox - Eastern Catholic clergy dinner was so graciously and warmly hosted by Roman Catholic Bishop of Scranton, Joseph Bambera. It was a wonderful time! His Eminence Archbishop Mark attended with 15 Orthodox clergy and as many Eastern Rite Catholic clergy as well as the priests on staff at the Roman Catholic Diocese of Scranton. Two retired Roman Catholic bishops, Timlan and Daugherty also attended. There was a very palpable spirit of camaraderie. Archbishop MARK emphasized the need for the clergy to be living examples of Faith in Jesus Christ by not just talking it but walking it. Bishop Bambera emphasized the need for us to work together on those issues we agree, i.e. respect for life and care for the poor and weak. There ARE so many things that we can do together so that the unbelieving world at least sees us working together for God's glory and the salvation of humanity.